On the rolling Rimini hills, surrounded by a magnificent park, stands Villa Des Vergers. The building dates back to 1600 and was built in a Neoclassical style for the aristocratic family Diotallevi.
In 1843 it was bought by the Parisian aristocrat Marie Joseph Adolph Noël Des Vergers, a renowned Etruscan expert, man of culture and of classical studies. Thanks to his patronage the splendid San Lorenzo in Correggiano home became a cosmopolitan meeting place for the intellectuals, artists, and politicians of the time.

Villa des Vergers was designed by the French architect Arturo Diet in 1879. To obtain the necessary marble Des Vergers travelled to Istria, Verona, Valpolicella, and Vicenza. The death of Hèlene Noël des Vergers in 1934 brought the dynasty to an end along with a period of splendour that had lasted about a century, marked by receptions, feasts, and concerts that turned the villa into a small court.

Between 1936 and 1937 the whole property was bought by Prince Don Mario Ruspoli, who entrusted the project and landscaping of the garden to Pietro Porcinai, a renowned XX century Italian landscape artist.

During the Second World War the building was employed by the Germans as a General HQ, while the local people found refuge in the Belvedere area. In 1946 the villa was bought by Attilio Castiglioni, an Italian-American entrepreneur, who had the building restructured after the damage that occurred during the Second World War. Upon Castiglioni’s death in 1988, it was bought by Luigi Annibali and Piero Reggini, who in the spring of 1994 sold it to Andrea Angelo Facchi.

Under the patronage of Andrea Angelo Facchi many refurbishment, restoration, and consolidation projects were carried out.

The projects undertaken over the centuries upon commission of the various owners have not been sufficiently documented, so it is not possible to provide a detailed historical account of the development of the building.

However, it is the work carried out at the end of the 19th Century that has lent the building its current style, with the exception of certain details. The Villa and its enchanting park are a rare example in Italy of the French Eclectic style that characterized the Napoleon III period. 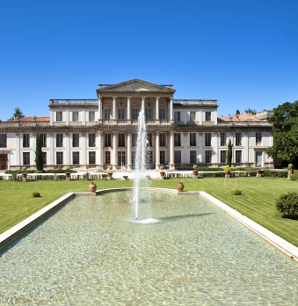 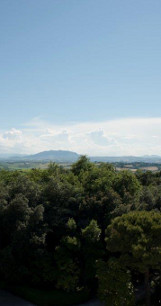